My New Family Wikia
Register
Don't have an account?
Sign In
Advertisement
in: Character, Female, Harding Family,
and 18 more

To be herself one day and honest to her family

The Ex Game
I Promise You
Where Did Veronica Baker Go?
VERONICA

Sophie Reynolds
Veronica Baker is a character in My New Family Series. She is the twin sister of Evie and of Ryder Harding's children as well as Promise's older half sister. 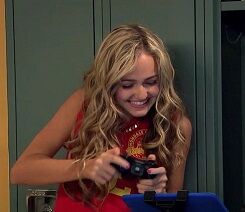 In high school Veronica has a tomboyish style, didn't wear make up, only a little if she did. She wore her blonde wavy hair open and loose on her shoulders. It looked messy most of the time. She has hazel eyes and is 5'2" (152 cm) tall. She has a gamer style.

As she grew older, she got more fashionable. She also started styling her hair and using make up as well.

Veronica Baker was born in 2014 in Morrison Creek, Oregon, U.S. to Monica Baker and Ryder Harding together with her twin sister Evie Baker. She didn't know who her father was though until she was a teenager.

When attending kindergarten, she and her sister meet the young Promise Copeland, who they befriend quickly and stayed friends until the end of high school. In high school Veronica finds out her best friend Promise is also her paternal half-sister and the three girls grow closer.

After graduating Jefferson High School, she and her sister Evie moved to New York to attend New York University. Soon later she drops out and cuts off all contact with her family.

Evie and Ronnie are not only twin-sisters, but they are best friends as well. They talk to each other about everything.

Cole and Ronnie have been dating for a while during her Senior year after he chose her over Evie. With her graduation coming up Ronnie felt like she was much older than Cole and didn't want to go to college with a boyfriend that makes her feel older

The name Veronica is a girl's name of Latin origin meaning "she who brings victory; true image"

The distinguished surname Baker comes from the ancient culture of the Anglo-Saxons. The name is derived from the Old English "baecere," meaning "baker," and was first borne as an occupational name.

Community content is available under CC-BY-SA unless otherwise noted.
Advertisement