The Fitzgerald Family is a main family in Married on Paper, Married for Real, Married with Kids, I Promise You and Champions as well as one of the main antagonists in My New Family, Smoke and Fire, The Ex Game.

Keeley Fitzgerald
Add a photo to this gallery

Elle Conte is the wife of Campbell.

Avalon Conte is the step-daughter of Campbell through his marriage to Elle.

Through Eliza, Brandon and Bradie

Ryder Harding is the father of Brandon.

Mitchell Gerard is the father of Bradie.

Through Fabian and Keeley

Tiffany Ridgewood is the mother of Keeley and the wife of Fabian.

Sean McCurdy is the husband of Keeley.

The Irish name Fitzgerald (spelled Mac Gearailt in Ireland), is of Anglo-Norman origin meaning 'the son of Gerald'. The Fitzgeralds of Ireland are said to be descended from Maurice, son of Gerald (husband of Nesta, Princess of Wales), constable of Pembroke and of a royal heritage in Wales. 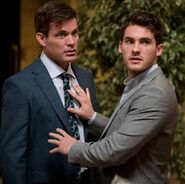 Robert Fitzgerald and Brandon Fitzgerald
Add a photo to this gallery
Retrieved from "https://mynewfamily.fandom.com/wiki/Fitzgerald_Family?oldid=12471"
Community content is available under CC-BY-SA unless otherwise noted.